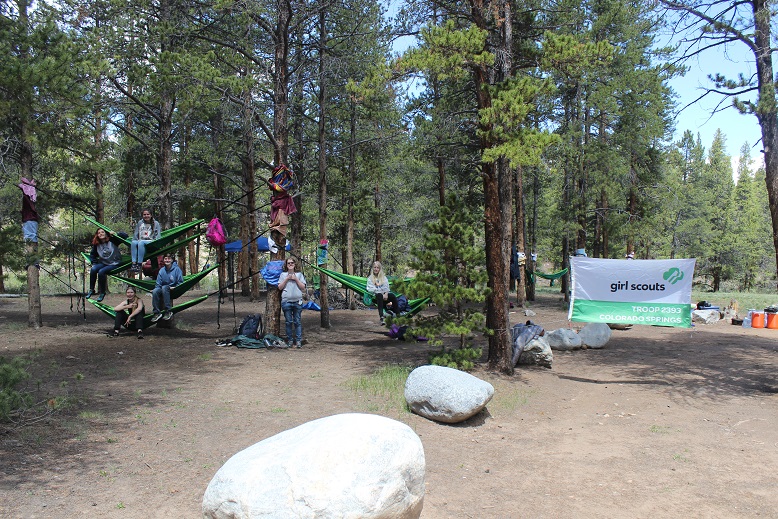 This year Girl Scout Troop 2393 decided to use some of the proceeds from their cookie sales to go Hammock Camping. Of course I was all about this, so we planned a couple of dates, one for June, another for July.  The theme?  “Chill”.

This past weekend was the first campout, and I just have to say, success! (kind of…)

After a long week of little sleep everyone met at my house at 6am on Saturday morning and we packed up the gear in my truck. It’s amazing how much gear is needed for a few days doing nothing!  After the 3 hour drive full of conversations centering around summer reading lists and upcoming concerts we arrived at the dispersed camping area and the girls spent some time picking out a site.  They didn’t like the first few spots, but settled on one that had creek access and trees they could set up their hammocks comfortably.

We unloaded the truck and split up into two teams: One to set up hammocks, another to collect firewood. I headed up firewood collection, which proved more difficult than anticipated.  We weren’t able to find much wood on the ground, but we were able to find some downed trees, and decided to just take those back and cut them up at camp. 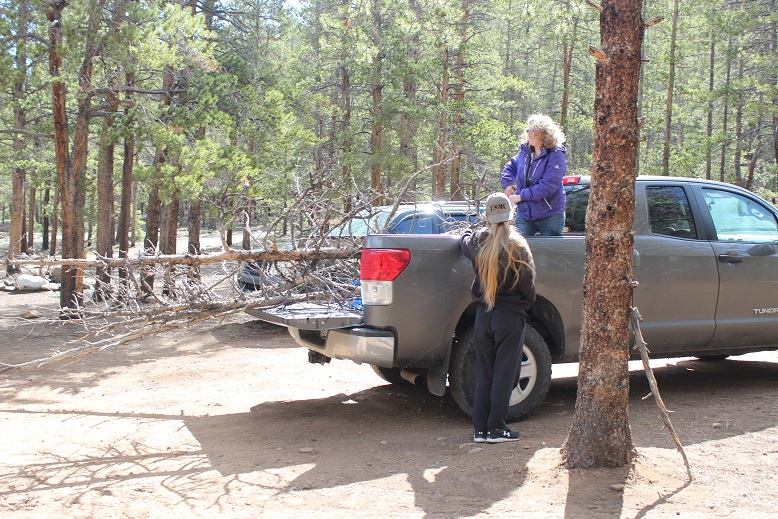 The girls weren’t yet done setting up camp when we made it back with the firewood so I got some pictures of them in the process (the towels help protect both the trees and webbing). 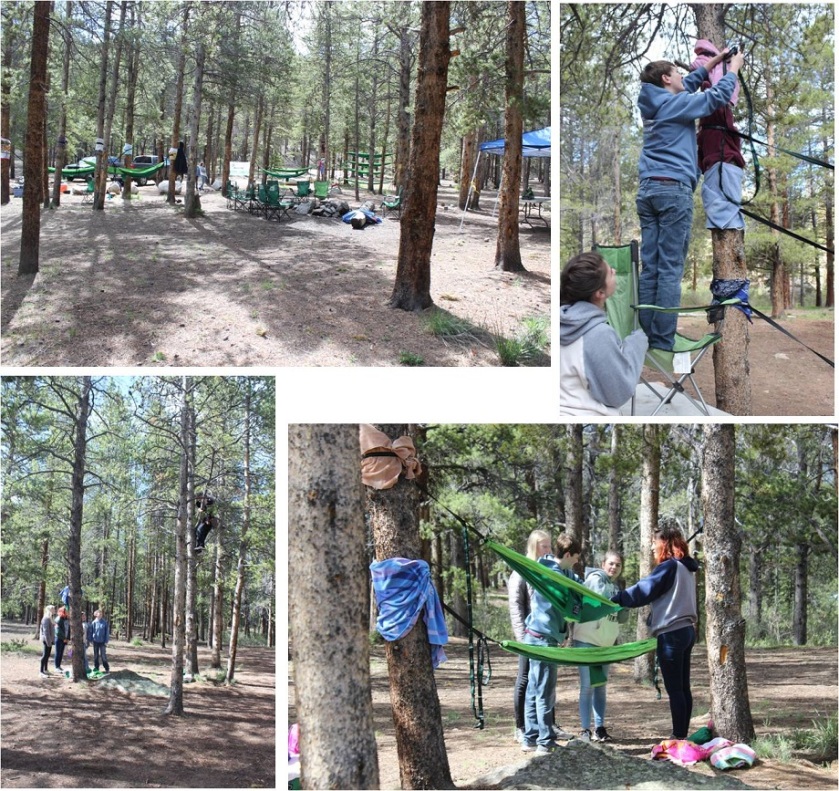 After campsite set up the girls had fun playing in the hammocks. The girls who chose to set up their hammocks on top of each other (despite my telling them it would make getting in/out difficult) had a blast getting up into their hammocks, and then turning themselves over so they were face to face with the person below… 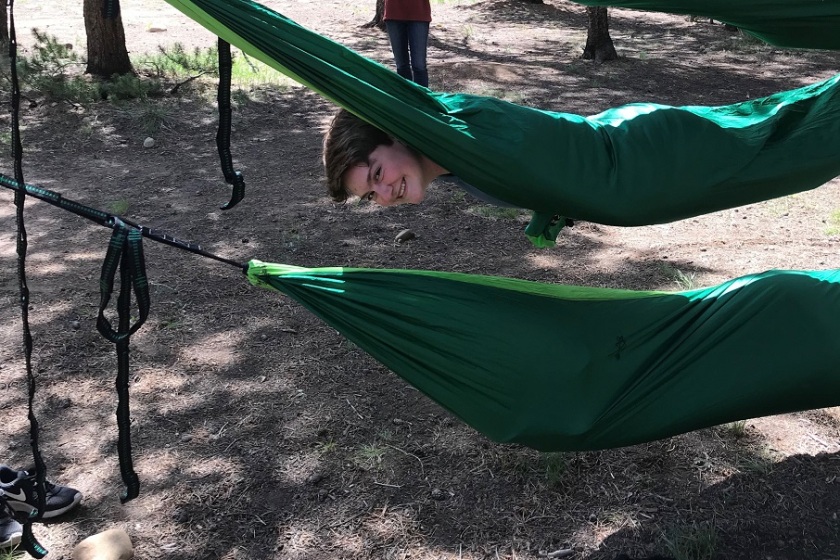 The girls did a great job! The only thing wrong with this set-up?  The weather forecasted rain, and they didn’t have tarps set up yet.  That changed quickly when the weather picked up.  We got a light dusting of snow and the girls all ran to set up shelter 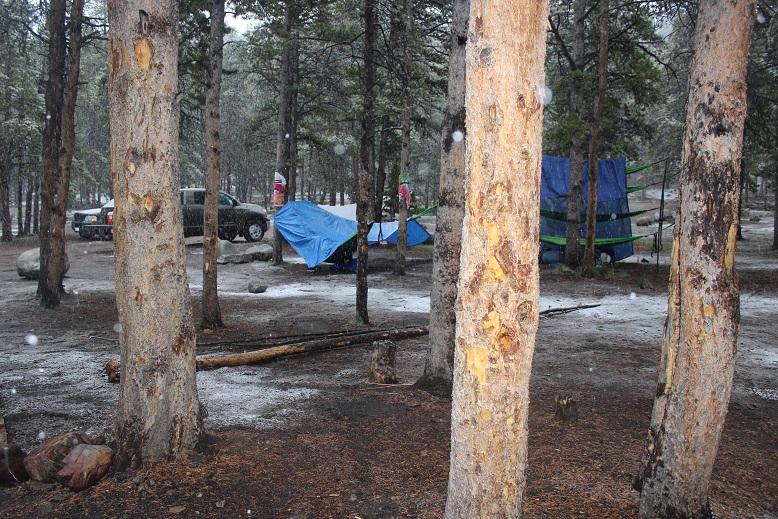 Believe it or not, the tarps were adequate. Ok, next we’re on to food.  The girls cooked their own food as well… some were in charge of fire 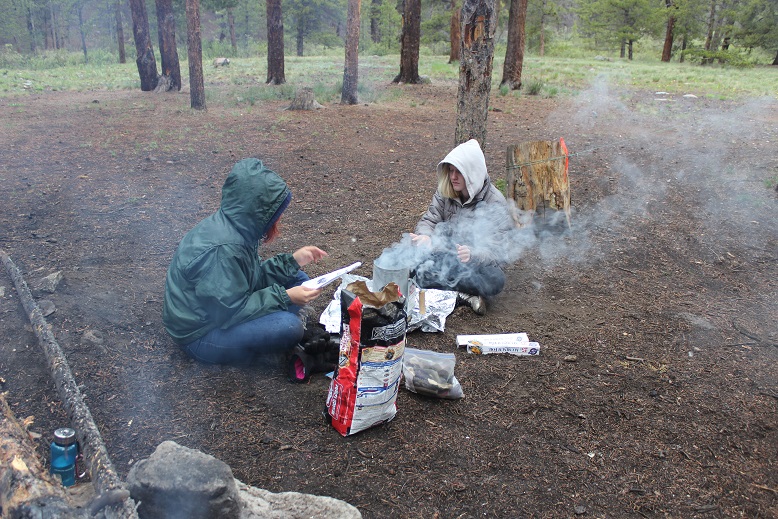 and others were in charge appetizers. The plaintain chips were amazing!

My favorite was the whole chicken they cooked in the Dutch Oven! 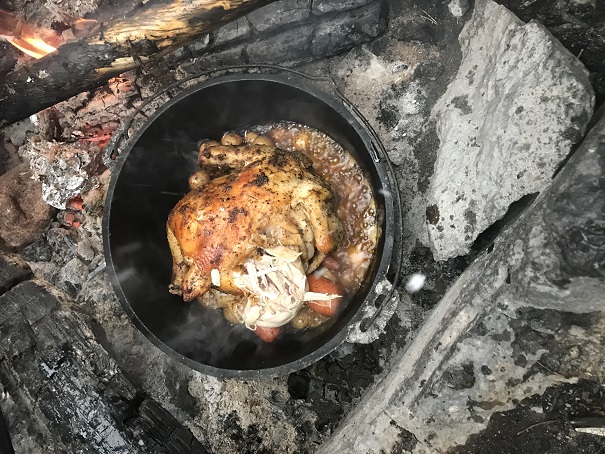 After dinner the girls sang songs by the campfire. Emily, just getting back from a week at Girl Scout Camp, was especially energetic.  Her call and response songs garnered less than enthusiastic comebacks, and she loved hamming it up even more!  As you can see from the photo below, the weather became colder than anticipated 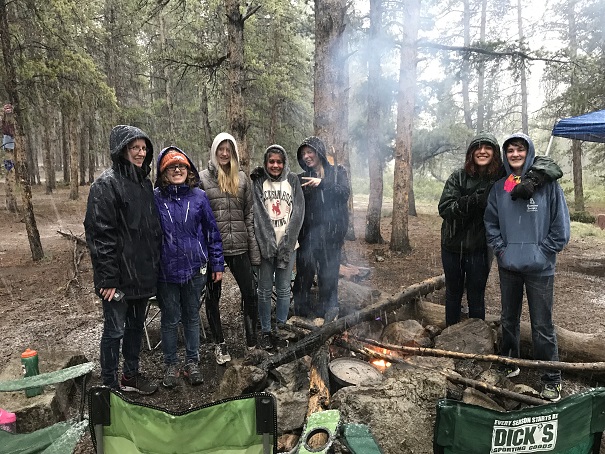 Around 8pm the snow became heavier and even though it was still light out we decided to call it a night. It continued snowing all night long.  It wasn’t enough to accumulate, but it was wet and icy 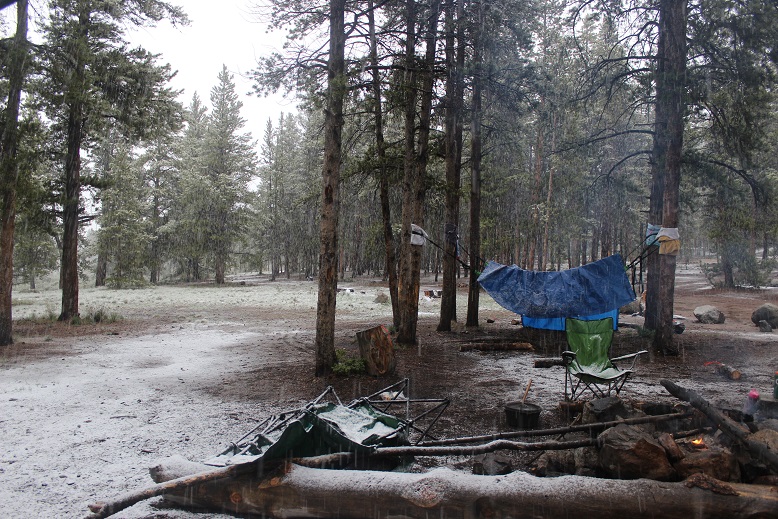 This was the first time I’ve ever slept in a hammock, and I have to say, it’s not a bad way to camp! I didn’t sleep very well, but it wasn’t due to the hammock, it was due to the cold.  I was warm everywhere except for my feet, which felt like solid blocks of ice.  I woke up in the middle of the night to 3 rounds of gunshots, 20 at a time in rapid succession.  After that it was hard to fall back asleep.  It got down to 24 degrees. The morning was cold and the girls were slow to become cheerful.  They wanted to “chill” as much as possible, so we cooked our waffles over the campfire (ok, heated them up) 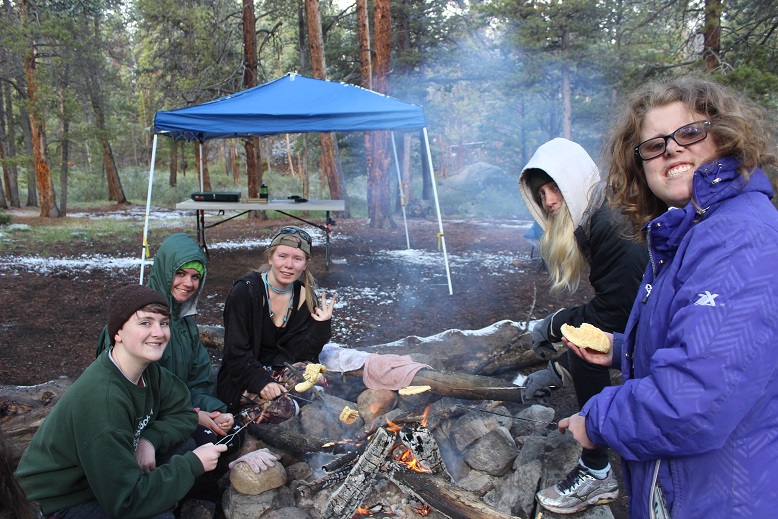 The snow wasn’t letting up and it didn’t look like it had any plans to stop, so we packed up our gear earlier than we’d anticipated and drove back home. Everything came back wet and muddy.  It’s currently sitting in my living room (on a dry tarp), ready for the next trip.  All in all the weekend was a success, and we expect the next one to have better weather, so it should be just as much fun!