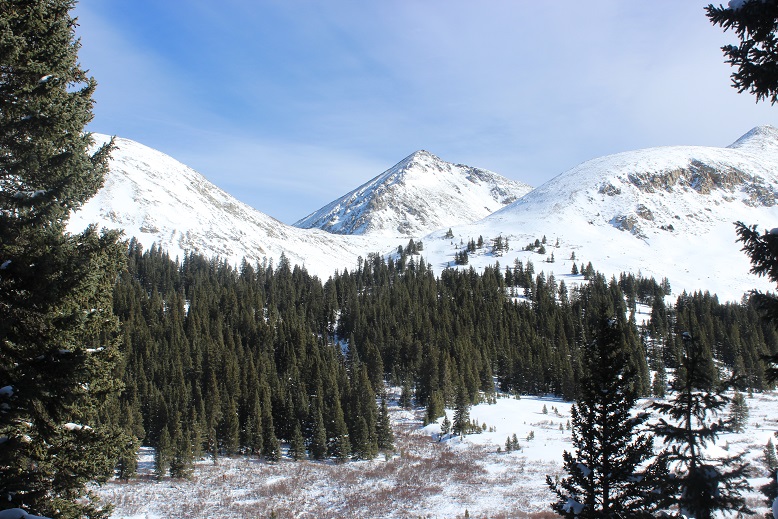 I really wanted to do Atlantic and Pacific together, but until April I have limited time schedules for hiking (I need to be back at my truck by noon to make it home in time to pick up my daughter from school, so it’s hikes under 8 miles until then).  The weather indicated Atlantic Peak would be a good choice for today, so I went for it.  This was only supposed to be a 4-6 mile hike and I wanted to break in my new winter hiking boots.  They were supposed to be lighter and warmer than my Sorrels, but I was skeptical so I wanted to use them on a shorter hike before committing to longer distances.

I arrived at the Mayflower Gulch trailhead at 5:15am to 14* weather, much better than the -5* weather of last week in the San Juans.  I was also pleasantly surprised to find it was right off the road:  no off road driving for me today.  There was one other vehicle (a Subaru) in the lot, and while the gate was open up to Boston Mine I decided to park my truck at the lower lot and hike in.

The lower lot was icy!!!  I put on my microspikes in the truck and gathered my gear.  I set out at 5:30am.  It was very peaceful hiking at night.   Silent.  Very silent.  No moon, but the stars were magnificent!  The only sound was the snow falling off tree branches and onto the trail below.  The trail was tightly packed down by other hikers, snowshoers and skiers.

A 4WD vehicle could have made the icy drive, but since this hike was so short it didn’t seem worth the extra mile and a half.  I made it to the Boston Mine area before sunrise and put on my snowshoes in the dark.  I was lazy so I kept my microspikes on and just put my snowshoes on over them.  If I needed to take them off it would be a quick transition and maybe I could keep my gloves on the entire time (saving my fingers from the cold).

Oh, btw, this fence is not the height of a normal fence… it’s probably half the height (so the snow looks deeper than it actually is).

Snowshoes ended up being a great idea, because while the trail was packed down, as soon as I went off trail I started sinking to my knees, even while wearing my snowshoes.  I looked for a trail across the gulch, but it looked like I was the first since the last snowfall so I broke my own trail.

The sun was beginning to rise, and Jacque Peak looked beautiful. 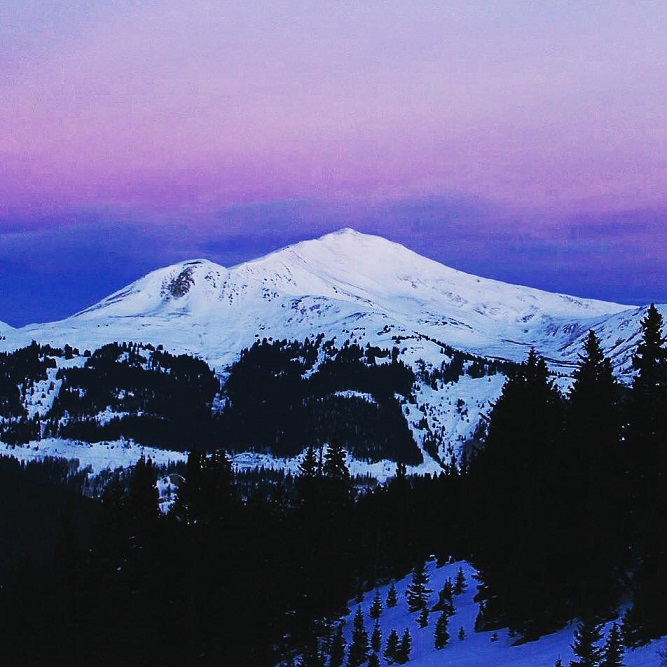 The snow was sugary and made snowshoeing difficult.  I’d be fine for a few yards, and then plunge up to my waist.  This was a serious problem in the willows, but I made it across the gulch and was surprised to exit and stumble upon a cairn!  This was an unexpected treat!  I found about 4 cairns on the entire route, always unexpected and sometimes on my way back down.

After crossing the gulch I was supposed to follow Mayflower Creek up to Atlantic’s west ridge, but the snow didn’t look stable and it looked really deep, so I stayed higher up on the hillside.  This was great (early elevation gain) but there were times I was seriously worried about avalanche danger.  It wouldn’t have been an intense avalanche, but I could see signs I should take an alternate route back once it warmed up. So I was slow in traversing the slope, but careful and ultimately safe. 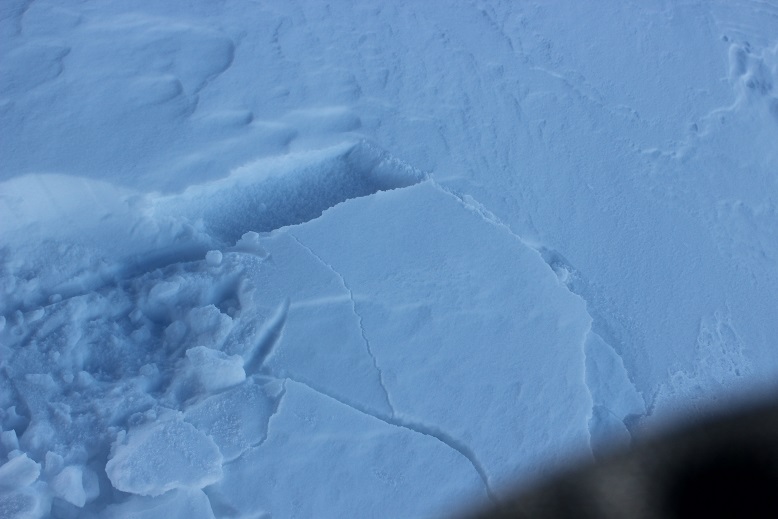 Here’s the route I took

My next task was to hike Atlantic’s lower west ridge.  This ended up being more difficult than anticipated:  the snow here was very consolidated, unlike the sugary snow on the slopes and gullies.  My snowshoes weren’t going to cut it.  I took off one snowshoe and tried it with my microspikes.  They became ice skates.  Hmph.  Ok, I was going to need to get creative.  I put back on my snowshoes and got out my ice axe.  This wouldn’t have been a problem with two ice axes or two ice picks and crampons, but I only had one ice axe and I hadn’t brought my crampons (I thought it was still too early).  So I used my ice axe to drill a hole big enough for my left hand and then struck the snow with the axe and my right hand for support and lifted myself up.  My snowshoes used the holds I’d made for my hands.  This worked very well and I was able to gain the ridge in no time at all.  (Note to self:  It’s time for crampons). 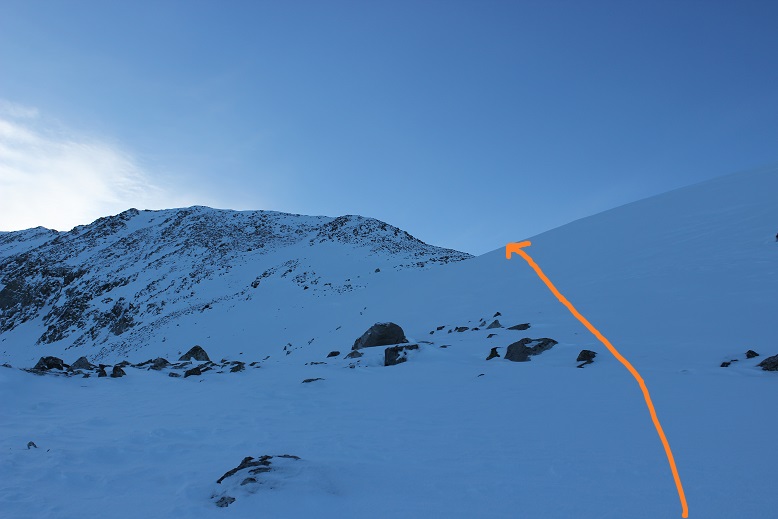 Here’s a look back on the route 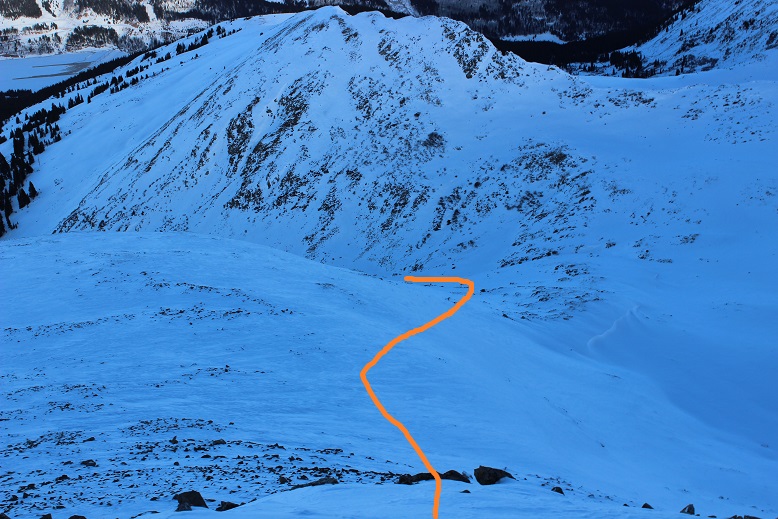 From here I was just supposed to follow the trail to the summit, but there wasn’t a trail, and in fact, at about 12,700’ I encountered some of the most difficult terrain of this hike. 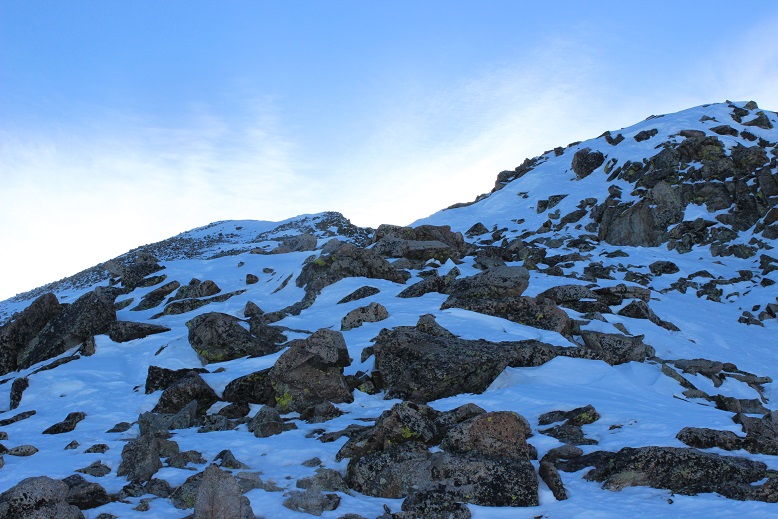 This is where I wanted to turn back.  I seriously considered it.   The snow was intermittent and what snow there was was sugary and covering loose talus, so I couldn’t get a good grip on it in my snowshoes.  I took them off again  to try it with just spikes and it was even worse!  My microspikes were of no use:  I really needed the stability/flotation of snowshoes.  Even though they weren’t perfect, they were a big help. This area took me much longer to navigate than it should have, but I didn’t quit and I didn’t turn back.  I gained this ridge and was met with this:

Wow.  That ridge didn’t look too difficult in normal conditions, but I could already see this would be a challenge due to the unpredictable snow.  Maybe not a challenge for seasoned snow summiters, but I’m still new to this.  There was snow, lots of cornices beginning to form, and a narrow ridge to navigate.  I forged on ahead.

Luckily a mountain goat had been here last night and gave me some tracks to consider.  There were times I didn’t feel safe following it’s tracks, but they did give me a good general direction to follow, which was directly on top on the ridge. 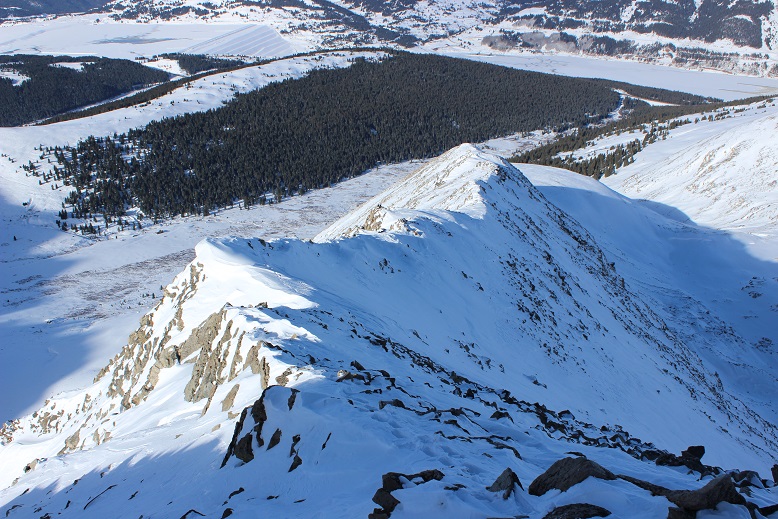 I’d reach one summit and find another, which was frustrating, but I knew everything I encountered was within my abilities and even a bit challenging.  I came across a few sections that would have been class 2 if there hadn’t been snow, but with the snow (and instability of said snow) I decided it was safer just to go straight over the ridge.  This turned the hike into a class 3 climb, and with snowshoes made me a bit clumsy (but safer than without). 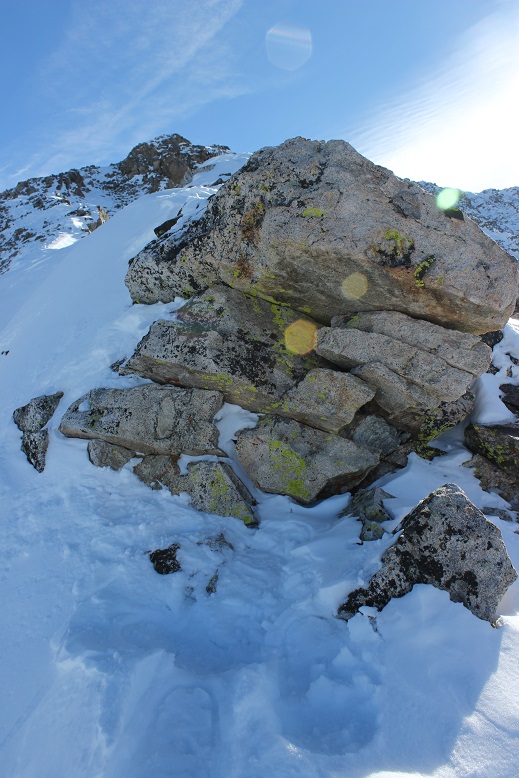 This was one of those learning opportunities where I was scared at times but knew I could do it so I kept pushing forward, even though there were many times I wanted to quit and come back in the summer.

Here’s the route I took:

The trek wasn’t long, and I wasn’t tired when I reached the summit, but I was cold.  Luckily my phone and camera were working, although my phone cut out halfway though the first video and I had to take another one and then it shut down.  I plugged it into my portable charger and took pictures with my DSLR.   I summited at 9am.

While it was cold it wasn’t windy, so the cold was bearable.  I stayed on the summit much longer than I normally do, taking pictures and marveling at the beauty of the mountains with snow.

I considered traversing Pacific Peak as well, but didn’t think I’d be able to do it successfully with my time constraints.  The class 3 route looks doable now though, so I may be back in the next few weeks.

Here’s a look back at the route

The trek back was easier than the hike in because I just followed my tracks (and didn’t look down).  Looking down would have caused unnecessary anxiety.

Those ridges were something else!

Of course I took a shadowselfie 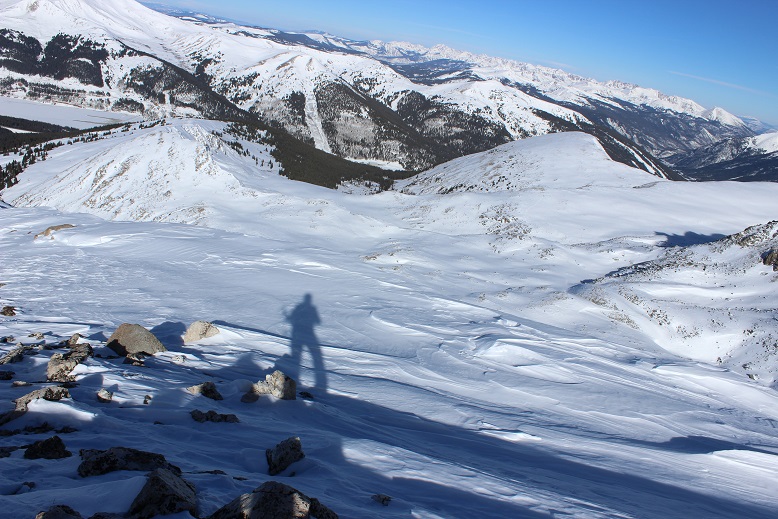 I decided to follow the creek down because that was what I was supposed to do and I was seriously worried about avalanche danger on the route I’d taken up the mountain.  I’m still learning about avalanches, but know some of the initial signs and what I was seeing wasn’t making me comfortable.  So I took the creek, but this proved difficult as well, as out of nowhere I’d sink up to mu chest in soft snow and then have to work myself out.  This happened many times and was frustrating, but I still felt safer than on the slope above.

Just before hitting Mayflower gulch my toes started to hurt:  the new snow boots were fine, but the snowshoes and boots combination was cutting off circulation in my toes and trekking downhill was beginning to hurt.  This hadn’t happened in my previous boots, and is something I need to consider.

Also, I lost my phone.  It fell out of my pocket and I had to retrace my steps ¼ of a mile uphill to find it.  That wasn’t fun.  I found it buried in snow (but attached to my bright orange solar charger).  I picked it up and trudged back down the hill and across Mayflower Gulch to Boston Mine. 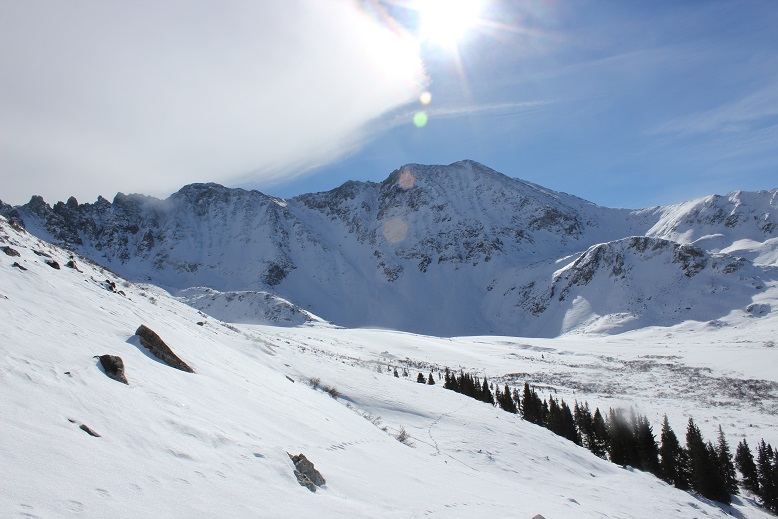 It was a beautiful day!  And warm!  I took off my gloves but had to put them back on again once I made it back to the trail (and shade).  Have I mentioned I love my new gloves! 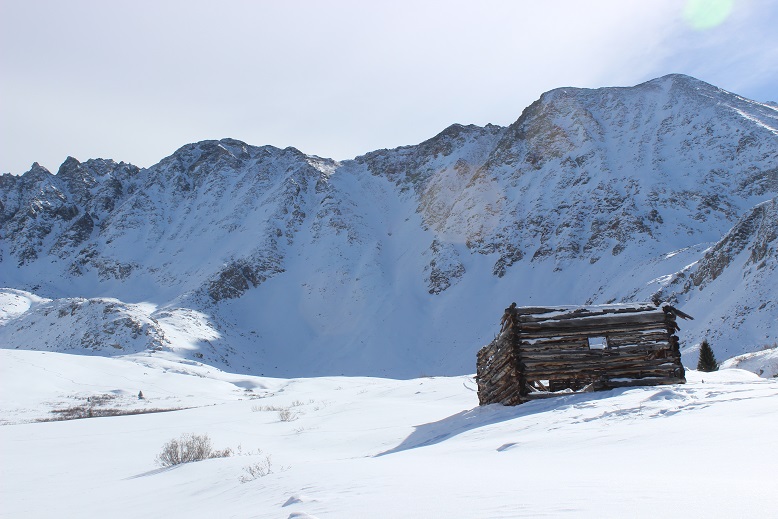 My new winter books are ok, but despite my double tying them and folding them under my laces they still came undone while hiking, which isn’t an option for me since I can’t tie them wearing mittens.  I may try safety pinning them next time.

I made it back to the trailhead at noon and looked at my STRAVA map.  Hmph!  This wasn’t right:  It showed my trek to the summit, but it seems it stopped working there and picked up again where I found my phone in the snow after losing it (please don’t attempt to take that straight line:  it’s not safe!!!).  So while the elevation gain is most likely correct, the trek down and mileage definitely are not.  My iPhone told me I’d hiked 6.8 miles, so I’m going with that for mileage.  The hike was 5.5 hours.

Here’s my Relive map (which is also false since it did that straight line thing from the summit to where I lost my phone).

Mom, Solo Colorado 14er Finisher, Outdoor Enthusiast, Traveler, and Girl Scout Leader with an MBA in International Business and Marketing. I work in Software. I value adventure, growth, courage, wisdom, integrity, accountability, and family. I enjoy yoga, wine, traveling, reading, and the outdoors (especially hiking, backpacking, fishing, and camping). I strive to be the person who inspires and motivates myself and others to succeed. View all posts by Laura M Clark