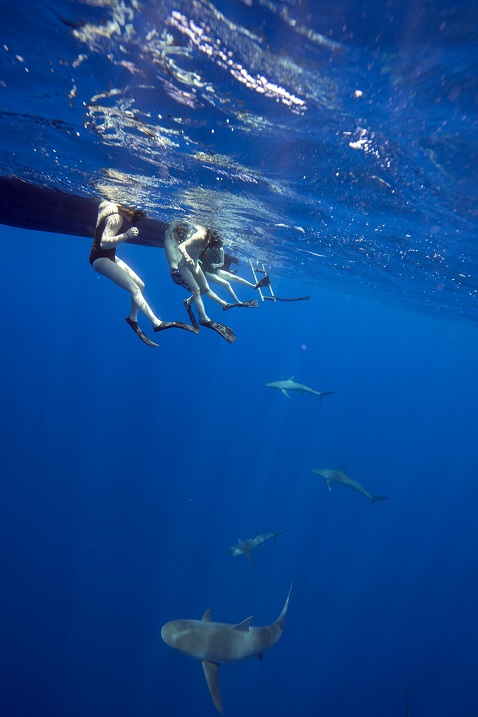 As we were planning this trip to Hawaii last March, I came across an ad for shark diving. I’ve been on a reef dive with sharks before, but it’s always been on my bucket list to swim with sharks in the open ocean.  I did some research, and unfortunately the only island in Hawaii that did shark diving was Oahu, and we were staying on the big island.

I’ve always loved sharks, and it seems my kids do too. When I was younger I’d wanted to be an Ichthyologist for a while, my goal being to study sharks and teaching people not to be afraid of them.  When I was I the 3rd grade I checked out the same book every time my class went to the school library:  a black and white book on sharks written by Jacques Cousteau.

I told the kids about it, and they were all extremely excited with the idea in general, so I decided to crunch some numbers to see if I could make it work. If I used all of my hotel points from work and we brought our own food on the airplane it was doable.  It meant leaving a day early and island hopping, but it was something we all really wanted to do and I hate to miss this type of opportunity, so I booked the tickets and made it my graduation gift to Thomas.  The only thing to decide now was which company to go through.

There were several to choose from, but the deciding factor was the shark cage. Only one company didn’t require a cage, and it was important to us we went on a free dive (no cage). This company also put a huge emphasis on education and conservation, so we went with One Ocean Diving.

After a very late arrival the night before we woke up in Honolulu. This was Hawaii as I’d never experienced it before:  a big city.  Everyone seemed to be in a hurry and there was no Aloha spirit here.  There were excessive signs with instructions (from closing windows to only 20 minutes on exercise equipment to no parking and security had to be asked before attempting to do anything).

Our first stop was a Starbucks, which was inside of a hotel. There was no parking, and we got into a bit of an argument with the valet guy before solving the parking situation by sending in one person at a time to get their coffee while the rest of us stayed in the car.  This meant we were in the area a lot longer than was necessary, but it got the valet attendant to stop yelling at us.

We’d secured a rental car for the day and were about halfway across the island on our way to see the sharks when my phone rang. I only answered it because it was a Hawaiian number.

They were sorry, but they were going to have to re-schedule our tour because the current and wind were too strong today. How did tomorrow look for us?

Ah!!!!! No!  This was the ONLY day we could do this, as our flight left at 7pm tonight to bring us to another island.  I begged and pleaded with them to see what they could do to get us in, letting them know we were strong swimmers and pretty adventurous.  The person on the other end said they’d talk with the captain and call me back.

I drove to the north shore anyway, just in case we were still able to do this, but it honestly didn’t look good. I’ve never known a company to cancel a tour unless they absolutely had to.   We arrived 30 minutes before we were supposed to board and headed to the kiosk to see what was up. They agreed to take us out today to see some sharks, but we would have to leave an hour later than we’d scheduled and we’d be going to a different location. But we’d still see sharks!  We were thrilled!

This meant we had an extra hour to do something with. We walked up and down the small town window shopping, and then went to a small beach.  We actually found a few pieces of sea glass here.

We were anxious, so we walked back to the place where we were planning on meeting our boat and sat and watched the other boats pull in.

Woohoo! It was finally our turn to go!  When the boat pulled up I could see why they were so worried:  it wasn’t very big.  It would be easy for the Pono Kai to be pushed around in the current or with strong waves.  We had 3 crew members on board and just the 4 of us diving, so it was like having a private charter.  The captain took us about 4 miles off shore while we all applied sunscreen and had a safety briefing.  They told us what kids of behaviors to look out for, and what different behaviors and postures meant.

We donned our flippers and snorkel gear, and one by one walked down the ladder and into the water.

I let the kids go first. As soon as we entered the water we were asked to hold onto the rope on the side of the boat until we were all in, and then two at a time could go swim with the sharks.  It was very important we stayed near the boat because the current was strong.  Heading in was a surreal experience!

As soon as I was in the water I looked down and immediately saw a shark below me. I’d been expecting to feel fear or some other strong emotion but I only felt calm.  I positioned myself in the water so I could float and watch for a bit.  Very soon more sharks became visible, and they began swimming closer and closer.  It was obvious they were swimming in a column. I could only see about 80 feet down, but I saw several rows of sharks at each depth. 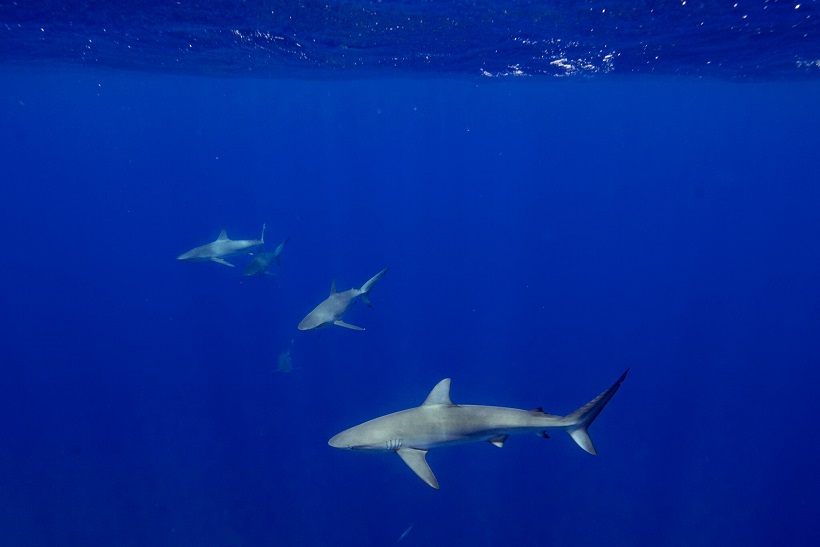 The whole experience was peaceful and even a bit calming. The sharks were Galapagos Sharks, anywhere from 6-10 feet in length.  As time went on they became more curious, some coming pretty close to us.  If I held onto the side of the boat and floated with my body parallel to the water a shark would swim directly underneath me.  This shark was sizing me up to see if I was a predator.  I enjoyed watching the shark move from side to side back and forth.  It was like they were floating instead of swimming (like I was). 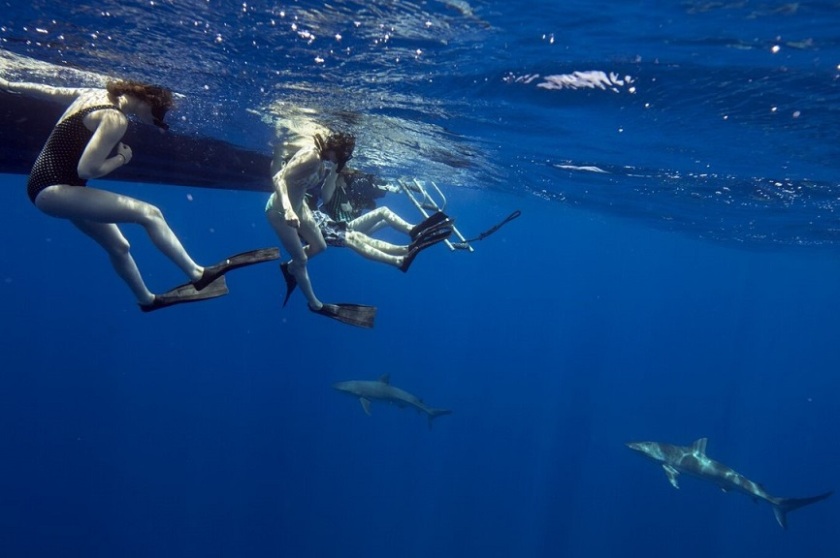 Every once in a while I’d change my position and be surprised to see another shark right next to me.

I didn’t just stay to the side of the boat however. I also dove down to actually swim with the sharks.  Since I only had snorkel gear I could only dive down about 20 feet, but it was still a really neat experience to be surrounded by sharks.  Every time I turned around I’d see more. 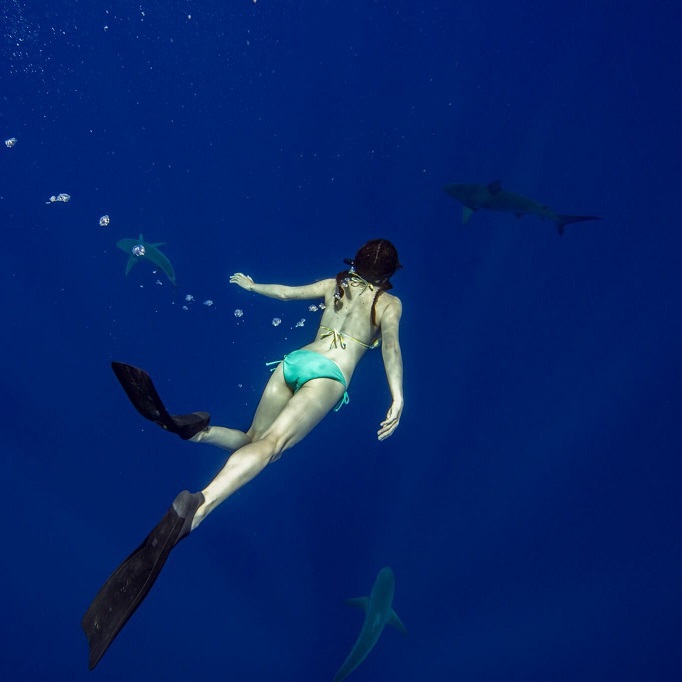 In the beginning of one dive I came up to ask the captain a question but didn’t get the chance: “Head gear on and face in the water!” he shouted to me before I could say anything. Oh yeah, right, this was dangerous.  Head back down and in the water it was.

The most difficult part about this dive was indeed the current. Every time I dove down I’d come back up about 40 feet away from the boat, and I’d have to swim against the current to make it back to safety.  This became tiring quickly, but it was and expected inconvenience and worth it to dive down and swim with the sharks.  We had at least a dozen sharks swimming around us.

The kids seemed to enjoy the experience as well. They weren’t scared, and took turns diving with the sharks.  Check out Rebecca! 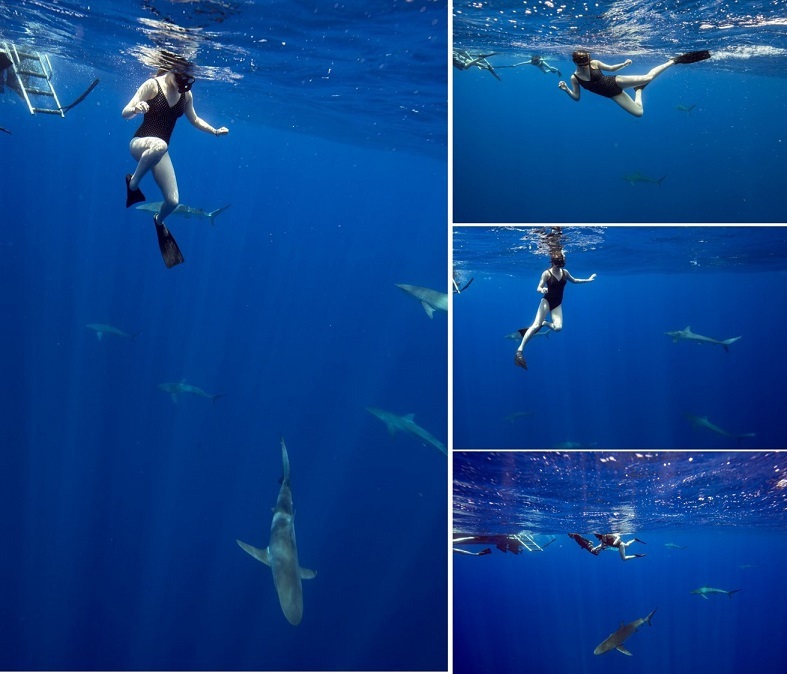 Emily liked hanging onto the back of the boat, which was really the best and least physically taxing position to see the sharks: they liked riding in the boat’s wake.  She commandeered this position for most of the trip, and we all envied her for it.

Thomas was all over the water, taking dozens of dives and making the most of his experience.

We were in the water for over an hour, and when our time was up it really seemed like it was over all too soon. 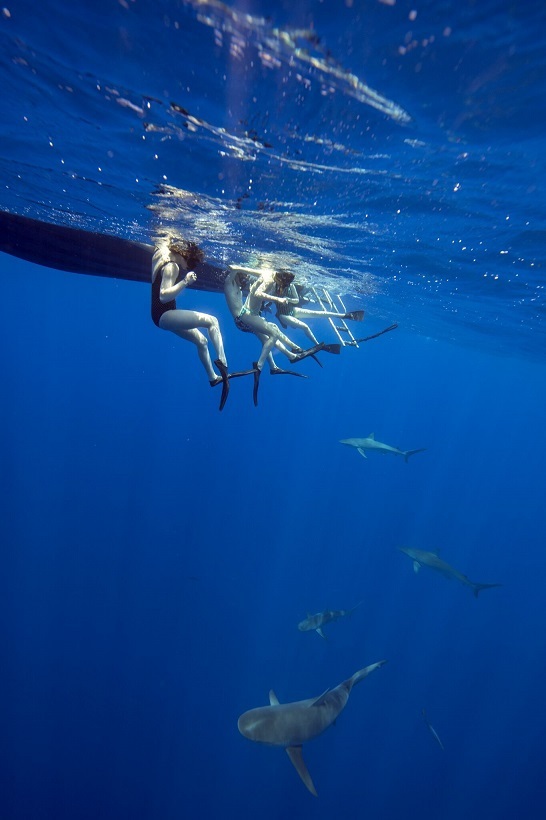 On the boat ride back I discussed the experience with the kids. They’d loved it!  I asked them if they ever felt afraid or scared, and they did not.  They also said if they ever found themselves in the water with a shark unexpectedly they wouldn’t be afraid.  Woohoo!  The excursion was a success!

Side note: I paid extra for the photo package (quite a bit extra) and it was totally worth it!  I was told I’d get about 100 photos of everyone together and the sharks, and they couldn’t guarantee equal numbers of photos of everyone.  It took them 3 days to get me the photos, and when they came I was delighted to find out they’d taken 760 photos!  Woohoo!  They came unedited, but that didn’t matter.  They got some great shots!  If you decide to use One Ocean Diving, get the photo package, you won’t be disappointed!!!

When it was over we came back to the dock and saw someone sawing up a Marlin they’d just caught. That was pretty cool.  We made our way to the restrooms and took a bird bath in the sink before heading back to the airport and our flight to Hawaii.

Mom, Solo Colorado 14er Finisher, Outdoor Enthusiast, Traveler, and Girl Scout Leader with an MBA in International Business and Marketing. I work in Software. I value adventure, growth, courage, wisdom, integrity, accountability, and family. I enjoy yoga, wine, traveling, reading, and the outdoors (especially hiking, backpacking, fishing, and camping). I strive to be the person who inspires and motivates myself and others to succeed. View all posts by Laura M Clark